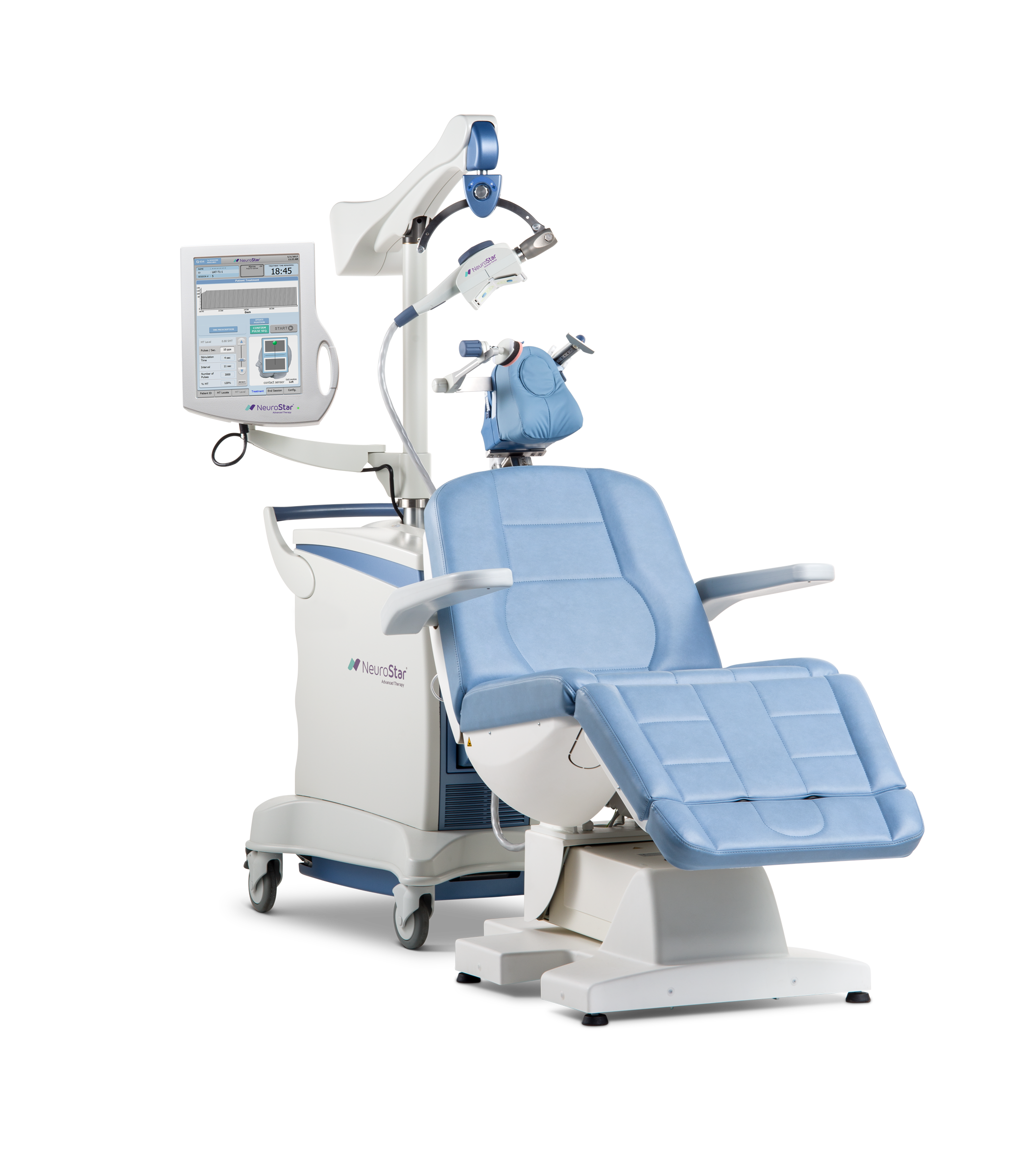 Major Depressive Disorder (MDD) consists of recurrent depressive episodes characterized by low mood, poor concentration and energy, disturbance of sleep and appetite, loss of interest in previously pleasurable activities, and feelings of guilt or shame. Depression may result in suicide or suicide attempts for many people.

PREGNANCY:
Many women choose to avoid antidepressant medications during pregnancy, but worsening depression symptoms could put patient in great danger. Based on a number of studies, TMS appears to be a promising treatment option for pregnant women who do not wish to take antidepressant medications. Many protocols have used exclusively right sided treatment with slow frequency stimulation to minimize the number of pulses needed to treat an episode. Thus far there have been no untoward effects to the developing baby

The depression symptoms of Bipolar Disorder are similar to Unipolar Depression (also called Major Depressive Disorder or MDD) and may include an individual being withdrawn from family and friends, showing noticeably little interest in usually pleasurable activities, and perhaps a significant change in weight or sleep. Persons with Bipolar Disorder also tend to have low energy levels during their depressive periods, and may have a hard time concentrating. In its most serious forms, these periods may result in thoughts of death or suicide. Depression symptoms of Bipolar could be managed by TMS treatment after manic symptoms control. 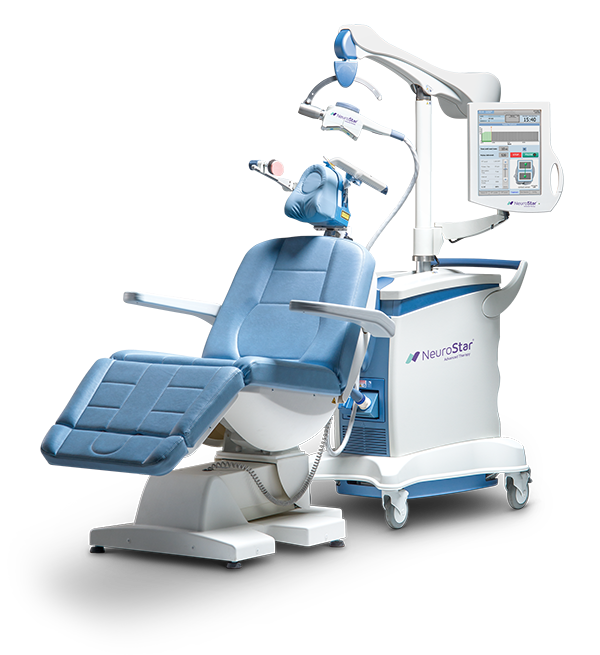 Schizophrenia is a disorder of the brain that affects approximately 1% of the world’s population. Symptoms usually consist of auditory hallucinations, delusions, disorganized thoughts and behavior, and impairment of usual social and recreational activities. Most people with schizophrenia will develop symptoms for the first time in their 20’s. Men tend to have an earlier onset than women. The severity can range from mild to completely disabling. The mainstay of treatment currently involves use of antipsychotic medications in combination with psychological and social supports.

Suicide is a complication of schizophrenia in about 10% of patients, and substance abuse occurs in 50%.

TMS is being successfully used to treat some of the depression symptoms associated with schizophrenia mainly negative symptoms. Auditory hallucinations have been shown also to be reduced with TMS, and other symptoms such as social withdrawal have been ameliorated as well.

*At this time, TMS is not FDA-aproved for the treatment of Schizophrenia, which would be considered an off label application. 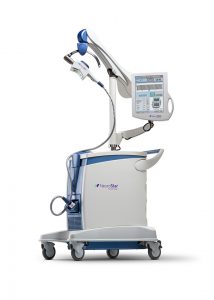 Experiencing or witnessing a traumatic event such as a disaster, war, torture, accident, fire or violence may lead to PTSD. The traumatic event is re-experienced through recollections, dreams, and feelings. Persistent avoidance of stimuli associated with the trauma is common. TMS may have a role in controlling symptoms of PTSD.

*At this time, TMS is not FDA-approved for the treatment of PTSD, which would be considered an off label application.

Stroke, or cerebral infarction, is one of the leading causes of mortality in the world after heart disease and cancer, and is the leading cause of adult disability. A stroke is caused by a loss of blood supply to the brain, due to an obstruction of a blood vessel. Oxygen deprivation can lead to irreversible damage to the brain – the severity of damage depends on the duration of deprivation. Cerebral infarction damages brain tissue, and leads to neurological deficits and functional impairments according to the brain area that was damaged. Cerebral infarction or stroke can lead to limb paralysis, speech impairment, visual acuity or field deficits, or sensory impairment.

Current treatments: The only FDA-approved therapy for stroke available today is treatment with tissue plasminogen activator (TPA), a substance that opens obstructed blood vessels. There is a time window of 3.5-4 hours after the onset of a stroke during which this treatment is effective. Transcranial magnetic stimulation (TMS) can non-invasively stimulate the release of neurotrophic factors (such as BDNF) from nerve terminals in the brain, which can strengthen synaptic connections in relevant brain areas and even stimulate cellular regeneration. A number of studies have established the safety of treating stroke patients with TMS, and have shown that this treatment improves post-stroke recovery. Also, it has been found that TMS therapy in conjunction with physical therapy significantly improves the rate and extent of rehabilitation.

TMS has been shown to have a rapid therapeutic onset for treating various neural disorders with extremely mild or no side effects. TMS is a safe, effective and rapid-acting treatment modality that works by using electromagnetism to stimulate specific parts of the brain.
The human brain is an electrical organ that functions through transmitting electrical signals from one nerve cell to another. Transcranial Magnetic Stimulation therapy can stimulate neurons to restore them back to normal functioning.

It could allow these patients to wait for surgical implantation with a good level of pain control, which could not be offered by analgesic drugs. Moreover, rTMS response could be a useful indicator of the success of the subsequent surgical procedure…In conclusion, motor cortex rTMS may be clinically useful in the management of chronic, drug-resistant pain to maintain a satisfactory level of pain relief in selected patients until the implantation of a cortical stimulator.” (Lefaucher et. al, 2004)

“Fibromyalgia syndrome is a widespread musculoskeletal pain and fatigue disorder.

“This improvement is associated with an increase in brain metabolism, which argues for a physical cause for this disorder and for the possibility of changes in areas of the brain to improve the symptoms,” said lead researcher Dr. Eric Guedj, of Aix-Marseille University and the National Center for Scientific Research, in Marseille.

“Previous studies in patients with fibromyalgia have suggested an alteration of brain areas is involved in the regulation of pain and emotion,” he said.

This study demonstrates that it is possible to modulate these brain areas using transcranial magnetic stimulation to correct brain abnormalities and improve patients’ symptoms.

*At this time, TMS is not FDA-approved for the treatment of acute or chronic pain, which would be considered an off label application.

If you feel like your migraines have too much control over your life, you are not alone. Many patients are not fully satisfied with drug therapy for migraine treatment or are frequently bothered by medication side effects. Now may be the time for you to consider a new direction. Care First TMS Center is excited to be offering TMS therapy as a treatment for migraine headaches. If you have at least one migraine per month, you may be a perfect candidate for this exciting new treatment option.

At Care First TMS Center, We recognize that depression could trigger more alcohol use as self medication. It’s crucial to manage depression symptoms as part of any alcohol or drug treatment program.

For those who have tried antidepressant medication while using alcohol or any other drugs  found the experience to be less than successful, Transcranial Magnetic Stimulation (TMS) may be just the right treatment to help achieve a more positive result.

Pathological gambling is characterized by a persistent pattern of gambling despite negative consequences. Studies are currently under way to see if Transcranial Magnetic Stimulation can interrupt the drive to continued gambling despite a desire to stop.

According to the American Heart Association, there are nearly 50 million smokers in the United States. The health and financial burdens are well known, but for many, even an intense desire to stop smoking isn’t enough. As with other addictions, if cravings can be controlled the success rate of cessation increases greatly. There have been several studies using TMS to curb nicotine cravings. Imagine the health and cost savings if smoking could be eliminated or drastically reduced.

*At this time, TMS is not FDA-approved for the treatment of addictions, which would be considered an off label application

Obsessive Compulsive Disorder (OCD)  is characterized by three features, or symptoms, in adults:
1) Obsessions, which are unwanted thoughts, images, or urges that trigger distress.
2) Compulsions, which are repetitive behaviors or thoughts that a person uses to neutralize or counteract a negative feeling or thought.
3) Anxiety. OCD can be diagnosed if someone has either obsessions or compulsions, or both.

Onset in adolescence occurs in about a third of cases. In another third symptoms appear in early adulthood, and in the last third they start later in life. If not treated appropriately, the disorder is often chronic, with waxing and waning of symptoms.

Obsessive-compulsive disorder often eases with medications that affect the brain’s serotonergic system, such as clorimipramine (Anafranil), fluvoxamine (Luvox), and fluoxetine (Prozac). TMS is being used to reduce the obsessions and anxiety that occurs with OCD. Care First staff developed a protocol that focus on the supplementary motor area using a slow pulse stimulation.

*At this time, TMS is not FDA-aproved for the treatment of OCD, which would be considered an off label application.

Transcranial magnetic stimulation (TMS) of the brain takes many forms and the response to TMS depends on several factors.

To illustrate the complexity of all of this, two articles published around 2000 looking at the effect of TMS on mood and anxiety in normal volunteers came to radically different conclusions.  Schutter, et al, concluded that right DLPFC 1 Hz stimulation “resulted in
a significant reduction in anxiety.” Jenkins, et al, also looked at right (as well as left) DLPFC 1 Hz stimulation and concluded that there was”no change of mood on a number of measures.”

The Schutter article was one of the first articles to point to 1 Hz right DLPFC stimulation as an potentially effective treatment for anxiety.

Since then other studies have been published looking at the use of TMS for “anxiety disorders” of various kinds. The majority of studies have looked at TMS for the treatment of PTSD, panic disorder, and obsessive-compulsive disorder.